Duale Survives, But No Work To Do 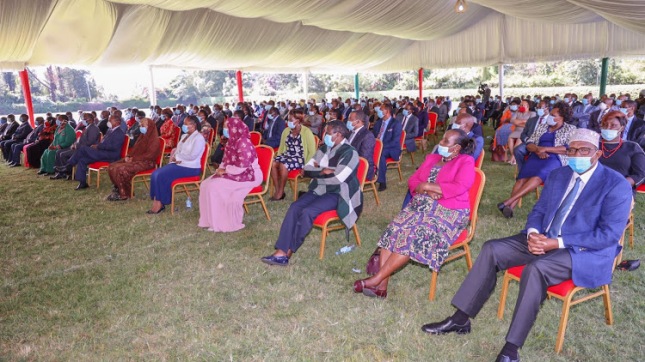 Majority Leader in the National Assembly Aden Duale survived the purge being undertaken by President Uhuru Kenyatta in the ongoing Jubilee party leadership changes. I earlier said the following about Duale’s surviving and put it like this:

I have been saying for a long time the only person who would have saved Duale’s job as majority leader is David Murathe as Uhuru did not care either way if Duale remained.

I subsequently changed my mind and said it was a toss up between Murathe and one other significant person who wanted Duale gone. As it was reported in the media, it was Uhuru to decide which of the two men will have their way.

It turns out Uhuru sided with Murathe to keep Duale in the leadership position therefore Duale now must do as Murathe (read: the system) tells him to do and will only be happy to do so. Uhuru will just sit and watch but, as always, he reaps and enjoys the fruits of the system’s labors with no sweat.

This is also why it was easy for Uhuru to lean in Murathe’s direction because Duale has never once insulted or disrespected him and neither has he failed to push through the president’s agenda as told.

In other words, he keeps his job in part because he has been clever in not offending the hands the fed him.

In other words, he keeps his job in part because he has been clever in not offending the hands the fed him.

Here’s what I said in sharing this story on Twitter:

Duale’s job was saved because (1) unlike others, he never insulted or disrespected #Uhuru (2) he did as told by Uhuru in carrying out his agenda in Parliament even as he was nibbling from #Ruto and (3) because he had #Murathe on his side.

I also said because of Duale’s dalliance with Ruto, he is no longer trusted by many in Uhuru’s camp, though he continues to enjoy the friendship and support of Murathe, who as I said was instrumental in saving him.

However, given the complications raised with this dalliance with Ruto, I posited that Duale keeps his job but he’ll be told what to do and must deliver without wavering lest the axe still comes down on him.

What is emerging now is Uhuru and those advising him have a better plan and that is, to yank all agenda management responsibilities from Duale as Majority Leader and give those to someone more trusted in a new position to be created to manage the affairs of the coalition in formation.

Indeed, it is believed the Secretariat for the new coalition is already in place so this will be a liaison position held by an MP Uhuru and the coalition trusts to move their collective agenda.

That being the case, Duale will have the title but no work to do than more than any ordinary MP does, if at all; not even as chairman of a committee.

This is brilliant as its akin to killing two birds with one stone: keep Duale supporters happy, including family and constituents while making sure he has zero opportunity to undermine or frustrate Uhuru and coalition agenda.

The icing on the cake is he’ll be completely powerless and incapable of helping Ruto as they most certainly plotted previously.

Which begs the question, why would Ruto fight so hard to keep Duale in this powerful position if he cannot help him?

The answer is simple: Ruto is in the dark about the impending coalition arrangement and, in particular, these plans to neuter the position of majority leader to render it powerless, much like the DP’s own office has been reduced to an as needed assistant to the president, not the lofty nearly co-president responsibilities and autonomy he previously enjoyed.

That’s Kenya for you but I must admit I am liking it only to the extent we fix the system to allow these three things that are crucial for all of us progressives:

I will have no issue and would even support him if he vied in 2027, and God willing unless the president who succeeds Uhuru does such a fantastic job such that it would be imprudent not to support him or her for re-election.

In other words, nothing personal here; Ruto is a good man who simply finds himself at the wrong place and at the wrong time, never mind that he hustled to get here as he often claims–but propelled by the system is more like it.

That very system has now rejected him for their own reasons, those of us who want to see the breaking of this rotation of the presidency are simply beneficiaries of the rejection and that is alright as country is larger than an individual.