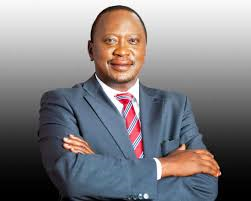 Admitting that his was ‘a bit angry’, Uhuru said people think he knows nothing when he keeps quiet.

Speaking in the Kikuyu dialect, Uhuru appeared to be responding to 57 MPs who met in Embu and took a position on the report on behalf of the region.

He spoke in Gatundu North, Kiambu county, when he presided over the official handover ceremony of Mang’u Dispensary Outpatient Block.

The facility was developed by the Japanese Embassy in Kenya.

The Embu meeting was also attended by Agriculture CS Mwangi Kiunjuri, who has now twice been with the MPs before they issue statements that appear to contradict Uhuru.
“They see me silent and think ‘he is just there and knows nothing’. There is nothing I do not know and when the time comes, I know those who speak and they are not those who are speaking now,” the President said.

He added; “Don’t allow people to keep telling you things like you are fools. You’re not foolish. And don’t allow people to make you look stupid to the point they must come and lecture you… that every time they come, it is just lecturing you on what you should do.”

Last week, a section of leaders from the Mt Kenya region agreed that Parliament is the way to implement the BBI proposals as opposed to a referendum.

This comes after the 57 leaders held a two-day retreat in Embu to discuss the way forward on the BBI report.

Some in social media are claiming Uhuru was drunk and that’s why he lashed out.

This has nothing to do with alcohol or being drunk; rather, Uhuru is doing what some of us have been urging him to do for a very long time and that is, he needs to start acting the boss he is. He has let the disrespect and other undesirables go on too long and we know in some quarters (yours especially), hakuna hata heshimu kidogo and that’s not good for the country–forget about him as an individual.

The country. Our beloved country.

We need a strong, respected and at times feared president. His father was one and I wouldn’t mind his tactics minus the obvious (read: assassinations), Moi perfected the art, Kibaki was coy but stealthy in the exercise of raw power but Uhuru has been hovering in no man’s land for way too long in this tussle soon to be a major skrimish between Raila and Ruto–which is really the only thing goin on in the country it’s about time he starts flexing his muscles na kunyorosha watu bila kuua, maharawe hapa na pale sawa.

Posted by Samuel N. Omwenga on December 4, 2019 in Politics