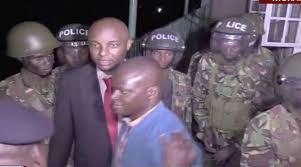 Once in a while I post my other social comments and blogs here for those interested to read, these were for the week of 8th September:

SO
Ndindi made a stupid comment. It was directed at Raila and his followers. His followers instead of condemning what Uhuru is doing are cheering him. Nobody in ODM including SO have condemned use of state machinery to harass Ndindi. Two wrongs don’t make a right. Next it will ODMers. Let them pray that a dictator does not turn on them in future. Only Miguna Miguna is getting it.

KM this is just comical.

KM you say “Next it will ODMers”…you’ve got to be joking!

The state machinery has stolen elections, beat up, fed Raila and ODM supporters since 2007!

What was PEV about?

Anyway, let me just take it you typed that one without thinking it through and that’s okay.

That being said, nothing that’s happening to Nyoro is anything close even in comparison when the state machinery is unleashed wholesale to quash the opposition.

He mad it his bed, now let him lie on it.

I will always support law and order when used consistent with law and it’s the “law” part that has always been ignored when the system decided things must go a certain way and they have always succeeded.

The system clearly says Ruto ain’t becoming president come 2022, you better believe that, not that it matters.

What matters is what the system wants and that ain’t Ruto in office as president; not anytime soon anyway.

Indeed, no amount of remaking himself will erase the damage he has done to himself which clearly has the system all systems go to stop him because they now know what he is capable of–and that’s just being DP.

He is still held up inside Inooro TV station. Police outside waiting for him. MP Kandara and his lawyer is alleging that Kibicho met others in Murang’a and plan finish Ndindi and her (Wahome) over Ruto.

KM unlike the Nation raid back in 2006, police can lawfully grab Nyoro at the TV station and I they have several options for that so this should not last long. As I said before, maharawe ya jela atakula.

Resisting arrest is a very serious offense everywhere and police take it personally and sometimes met out extrajudicial punishment and it wouldn’t surprise anyone if they finya his balls a bit before he’s taken to see a magistrate.

Guess who can spare his imminent arrest and all that? The very man these novices are busy disrespecting completely oblivious they’ll easily be left hanging alone when things get too hot.

SO
They cannot. They could only wait outside. Those days are way gone.

KM true the days of police raiding your home or business for no legal or legitimate reason are gone, but that analysis is irrelevant when we are talking about when police have an arrest nor search warrant.

Recall what happened to the Ruto sycophant Senator? He was holed up in his home assuming utumishi kwa wote won’t raid his home but was advised otherwise and heeded to his benefit.

You can’t break the law and hide behind “this is dictatorship” to avoid being arrested. Try something else.

The Kikuyu version is better (Tangatanga’s Ndindi Nyoro trashing Raila and Kieleweke). Please interpret for your pro Raila friends so that we dont keep them in the back. In the Kikuyu version, he is at the church where the issue took place is thanking parents for protecting him against the state gangs.

So, the issue is Kibicho and other forcing Central to support Raila. I think Wanjiru and other alluded to that. The question is whether it is wrong for Nyoro and other to support Ruto? If not, why should they be forced to support Agwambpo?

I will support Waiguru and others supporting rao and will condemn anybody threatening them or saying Rao cannot be supported in Central. Let Ruto and Raila sell their policies.

Please tell us why those supporting Ruto ought to be stopped.

You are peddling a classic straw man argument but let me dispose of it for the benefit of others because by peddling the argument, you already know this.

The issue is not whether a Kikuyu can or should support Ruto; they obviously can.

However, no one, not Ruto, not Nyoro not anyone else can or will be allowed to use divisive tactics, bribery and deceit to undermine the president, let alone peddling their unacceptable candidate from the perspective of what is good for the country.

The president and like-minded from Central have in their wisdom come to the realization and acceptance of the hard reality that the presidency cannot continue rotating between Kikuyus and Kalenjins when other mothers from 40 other tribes have sired children equally capable of leading the country, if not better.

That’s what is at stake, especially given the alternative is rejecting BBI and having Ruto bulldoze and have his way to the presidency tupende tusipende.

We know that outcome will thrill you to no end, but it won’t to a majority of the country and that’s what Uhuru and Raila have resolved it won’t be the case and, more importantly, those who control the levers of power distribution and sustenance concur.

We are pleased that’s the case.

Hawa wengine wacha wapige kelele so long as they break the law or sow seeds of discord. I used the later language to warn people in the lead up to 2013 and what I said has come to pass.

This, too, shall come to pass but note the irony of who now agrees with me and those of us who have been consistent on this point?

Yes, none other than Uhuru himself and that’s very reassuring and validates my changing position and starting to support him back in late 2013.

Funny how now those who cheered me for doing so are now critical and are now trashing the president.

We shall have the last laugh.

Response from RB1
What you propagate ndugu SO is a Raocentric interpretation of politics. The reality in Central and Kenya is different. Mark my words, Rao hataweza make it Uhuru spende asipende.

Talk to Wanjiku. Warsama did that by speaking to the Kikuyu common man on the street. You speak to Maina Kamurder ( just to help Khaguli pronounce it correctly not an insult.

He says Khamancher) and get it long. When you go home, visit River Road and speak to random Kikuyus there.

Another small bird has just informed me that the house on the hill had dispatched county commanders to read the mood on the ground and found over 70% is hostile.
Dynasties must fall! thats all!

Raila got less than 10% of the Kikuyu vote in 2007 and still won the presidency that was stolen from him.

Ruto can get 70% of the Kikuyu vote and still lose to Raila in a landslide.
Reality is he will fare no better than Raila did in 2007 and even if he does, it won’t make a difference in the final analysis.

“Dynasty” is of course a rejected and ineffective meme put out by Ruto and team Tangatanga to peddle a false narrative and none other than Uhuru himself exposed it’s futility and he’s right on.

RB1
SO
The lie is that the preferred candidate is Rao. That will be clear pretty soon.

Two things, Uhuru wants focus to be on the big agenda and BBI to pass. Most if not all Mt. Kenya folks supports him esp on the big four. Not sure of BBI but I dont think there is anything wrong with it.

The above are non-issues and Ruto may hold contrary opinion. The elephant in the room is on who to support in 22. If Uhuru leaves Jubilee or Ruto for Raila, he will be on his own. Folks may support BBIbut will not abandon Ruto. Mark these words and put them in Bank of America because you will earn interests in 22.

You only need to refer to this email. Kuria goes by the mood in Central. If they turn to Rao, Kuria will support Raila 100%. I dont follow Uhuru blindly. He must listen to people or he will be annihilated politically. Folks there do not support folks blindly. Let him find out why folks have stuck with Ruto.

My response:
I know and am now repeating myself but will continue to repeat until my fingers tire, saying we know there is a large segment of people from Central who will NEVER accept a Raila presidency but will have to deal with it when he is sworn as one because we only have one president at a time.

This will be no different from those who NEVER wanted Uhuru as president but have had to live with the fact he is our president.

Much like NASA is composed of several parties within, Jubilee is, in fact, in the same posture, even though acting as a party.

Yes, TNA and URP merged to form Jubilee as a party, but, what is going to happen in 2022 is the coalition that wins the referendum will field its candidates under that coalition’s banner and sweep nearly all seats across the country.

There won’t be Jubilee or NASA to be talking about.

Take that to the bank.

RB1
SO
For the first time you said a large segment and I agree. Thérè is hope for Rao so dont give up this parle. The year 2022 is too for. On Rao winning that is tour opinion. Even Mutuku disagrees with you. Je dors not have the numbers.

My response:
All these years, you have mostly been on the offensive, but this time around we have you all on the defensive. You also came out ahead in terms of who was sworn as president each time. Do you know why? Because you had the system behind you.

Now, let’s just say the system is definitely NOT behind your candidate Ruto and mind and as it doesn’t matter right now who they will be behind. Our money is it’ll be Raila going by all we know and that is what you call game over even before it is.

It’s akin to when the New York Giants went to play in Dallas yesterday and we knew them Cowboys (my team) will win the game, only question was, by what score.

It was 35-17 Cowboys one need not be a football fan to know that’s a very comfortable margin of victory much as it will be for Raila when h wins in 2022 but this time sworn as our next president.

[Ndindi was finally arrested late that night and, was released without charge–apparently on some deal he promised to behave henceforth]

Posted by Samuel N. Omwenga on September 12, 2019 in Politics, Uncategorized