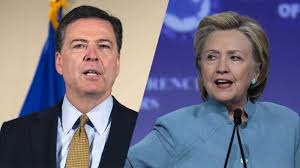 All Trumpians beginning from the demagogue himself are super-joyed with the news FBI Director has written to a House Committee saying new Hillary emails have come to light he would like to examine to determine whether they’re classified or their significance to the investigation he conducted for months and closed in July saying there was no basis to recommend indictment of Hillary.

Without going into the weeds on this, just know reopening of an investigation usually means discovery of facts or new information that’s material in the now closed investigation yet, in Comey’s own letter, he says he doesn’t know whether these newly discovered emails are significant or not, in other words, he’s just rushed to send the letter to the House for reasons really only he knows.

Second, regardless of whether this is a reopening of the investigation or something else, the outcome will not and cannot be known in the 11 days remaining before elections, which means, yes, the demagogue and his sycophants will try and exploit the news to the max but reality is, this is already a baked in issue for Hillary they may on the margins gain some votes as a result but not nearly enough or even close to close the crater between his numbers and Hillary’s.

In other words, Hillary is the next POTUS notwithstanding this peculiar but suddenly significant development if anything because the media will by hyperventilating over this for the next several days; so much for the rigged media, ah?

There are other reasons to dampen the spirits of the demagogue and his followers but no need to cover them all other than to repeat what I said elsewhere and that is, Comey is proving he’s politically inept and perhaps that’s a good thing because making this announcement does nothing but inject himself into the campaign–something all other law enforcement officials generally avoid be they Republicans or Democrats which in turn will subject him to further criticism and even open him and FBI to a broader criticism, namely, he was incompetent in his investigation to begin with–something only extreme Republican partisans have been making.

How can an email or emails emerge that escaped the snare of FBI’s intensive and extensive investigation? Does Comey seriously want to vouch for the Russians in saying they’re better equipped to find things the FBI cannot? That will be a shame.

What an ending to an already weird election year having the FBI director inject himself in the campaign in this manner which would only leave him even more sullied than he was heretofore in the hands of Republican partisans now he’ll draw the rage of Democrats as well, making sure neither is going to giving him high marks when all this is said and done.

Three things we know for sure:

One, he cannot conclude whatever he needs to do per his letter to Congress by election day, which is only 11 days away.

Two, even if he were to conclude whatever it is he wants to do in the 11 days, he cannot possibly suddenly announce he’s recommending that Hillary be indicted for surely, he will be run out of town by everyone except the most partisan of partisan Republicans.

Three, the outcome of whatever he wants to do will surely be known after the elections; if Hillary is president-elect or already sworn in by then, it doesn’t matter what the outcome is as the new administration will make sure if it’s something adverse, it’s simply ignored; if it’s not, they will still ignore and press on with their agenda to unite and govern the country.

In other words, this is much ado about nothing.

Posted by Samuel N. Omwenga on October 28, 2016 in Uncategorized