Trump Hijack of the Republican Party Is Complete 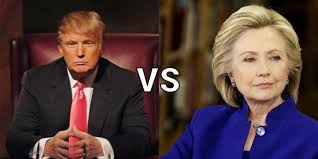 It’s a cliché already to say nobody saw this coming but the now all but assured nomination of Donald Trump as the Republican flag bearer in the upcoming general election against Hillary Clinton who’s also all but assured her nomination as the Democratic Party flag bearer raises the unlikeliest of prospects in American history and that’s Americans will have a liberal president come next year regardless of who between the two they vote for.

This is because Trump has been a life-long supporter of liberal causes via his supporting liberal Democrats such as Senator Chuck Schumer of New York and Representative Nancy Pelosi of California, not to say anything about Hillary Clinton herself who she not only gave political contributions, they were close enough as friends he invited her and her husband former president Bill Clinton to his latest wedding.

In fact, Trump, who’s 69 and a lifelong New Yorker, registered for the first time in New York as a Republican in July 1987, only to dump the GOP more than a decade later for the Independence Party in October 1999, according to the New York City Board of Elections.

In August 2001, the man many have always dismissed as a joker switched parties and registered as a Democrat only to return the Republican Party eight years later, according to The Smoking Gun.

After only two years as a registered Republican, Trump left the Republican Party again but this time he marked a box that indicated, “I do not wish to enroll in a party,” according to the Smoking Gun.

The Smoking Gun reported that Mr. Trump returned to the Republican Party in April 2012 where he remained put through last year when declared his candidacy.

Since declaring his candidacy, Trump has made it known to all he doesn’t really care about the party at all and he certainly doesn’t care about its conservative ideology but his mission has been to simply hijack the party and use it as a vehicle to get elected president, something every rich person of his pedigree dreams about not for the sake of having the job and actually working to do what is required but to check the box of things dreamed of that have been done which for Trump must have been the box right above the box “Dump Marla, Marry New Younger Hottie.”

It’s precisely for this reason that most Republicans, and true conservatives in particular have been so against Trump and even starting a #NeverTrump movement which is more than a hashtag but an effort to stop Trump from becoming the Republican Party’s nominee, a task more daunting than ever now that Trump has knocked off the last remaining hope they had in Ted Cruz who dropped out last night after being walloped in Indiana, a state he had to win if the #NeverTrump movement were to have any luck.

To be sure, those behind this effort may as yet play their last card, including even recruiting someone to vie as a Republican rendering credence to the notion and now reality that Trump has, in fact, hijacked the Republican Party and the total take-over is all but a formality left for the party’s Convention in July.

That being the case, we will have in November this non-Republican sympathizer and supporter of liberal causes leading the Republican Party against Hillary Clinton, a lifelong Democrat and liberal leading to this intriguing outcome no one would have expected and that is, having a liberal in the White House regardless of which party wins the presidency.

However, given the dynamics of this year’s elections and, in particular, given Trump has managed to offend almost every major group other than white men without college education, a fete which has driven his negatives through the roof, the next occupier of the White House as president is in all likelihood going to be Hillary Clinton this despite her own high negatives and other flaws which pale in comparison to what many see in a Trump presidency—scary stuff.

So, congratulations Mr. Donald Trump for your success in hijacking the Republican Party but this could only come at the expense of the party losing in a landslide as it’s surely poised to and for that, Democrats thank you for handing over the presidency to them, something that would not have happened were a Republican nominated—any Republican except Ted Cruz who’s hated even more than you.

Now, the question that remains is, how low are you going to go in your efforts to destroy Hillary even as you go down as the most unelectable candidate the party you’ve hijacked has nominated since Barry Goldwater in 1964?

As Hillary herself has noted, she has experience dealing with men like you who have no boundaries in what they say or do so she’s ready and so are voters who care more about this country than your narcissistic quest for the presidency and will resoundingly reject your style and tactics.

Posted by Samuel N. Omwenga on May 4, 2016 in Politics, Uncategorized