President Jacob Zuma of SA Has No Shame 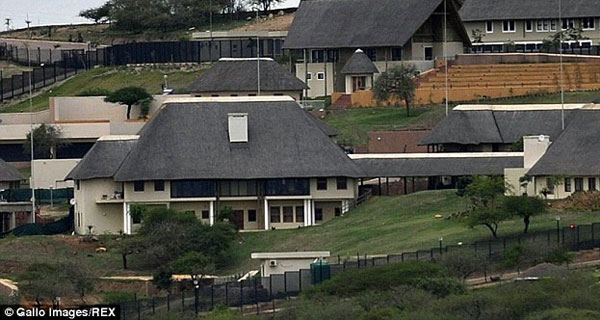 South Africa President Jacob Zuma, not unlike other pathetic examples of African leaders, is spending nearly Ksh 1.8 billion (more than USD20 million) of tax payer money to renovate his private residence and if this was not sin enough, the president through his cabinet ordered the media not to publish a photo of this home or do so at the risk of going to jail.

To their credit, and they really must be commended for this, the Standard reports that the media defied the order and published the on their front pages pictures of Zumaâs lavishly-refurbished home which comes with a swimming pool, helipad, tuckshop and even a football pitch.

Can you imagine what USD 20 million can do for the lives of millions of South Africans living in abject poverty? Or in making education available or affordable for the millions of kids in South Africa who have no education because they can’t afford or are learning in poorly funded institutions where they’re really not learning at all or to their potential?

How inept and gluttonous can these so-called leaders be?

One hopes the ailing greater leader of the country Nelson Mandela does not become aware of this pathetic and shameless exploitation and looting of the country’s till by Zuma, which goes against everything Mandela stood for and paid so dear a price in so doing only to have this Zuma act as if that meant nothing.

But even as Zuma must be condemned for these shameless act, it must not be forgotten that Zuma is president of South Africa thanks to the see no evil, hear no evil of the vast majority of his Africa National Congress, which propelled him to power, even as he  faced significant legal challenges.

He was charged with rape in 2005, but was acquitted under circumstances which were predictable, namely, trashing the victim as a loose whore who deserved it or could otherwise not be “raped” within the meaning of the law.

With tens of thousands of angry ANC youth baying for the victim’s blood—and violence were Zuma to be convicted, it was no surprise that he was acquitted.

In addition to the rape charge, Zuma faced a long legal battle over allegations of racketeering and corruption resulting from his financial advisor’s conviction for corruption and fraud but used his own version of tyranny of numbers to oust Mbeki from the presidency and occupied the office himself promptly having all charges against him dropped, the prosecutor oddly citing political interference.

As if the corruption before assuming office as president wasn’t enough—the man is alleged to have raked in hundreds of millions of dollars in lucrative deals involving military procurement alone, he’s now having tax payers pay for the extravagant renovation of his private residence—this after another of his private residence was equally renovated as a kickback for one of the alleged corrupt contract deals.

Again, the question is, have these people no shame?

What is it going to take to reign them in?

It obviously can’t be the ballot because they have a sycophantic and fanatic following who couldn’t care less about their exploits and corruption for reasons that simply defy logic.

Not now anyway but a concerted effort must be undertaken by the Civil Society to educate and enlighten these masses out of their ignorance and stupidity that’s causing them more harm than good.

Posted by Samuel N. Omwenga on November 24, 2013 in Politics