No Honeymoon for Uhuruto 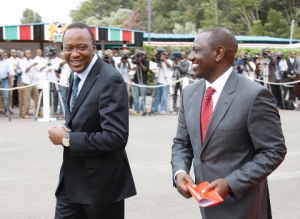 In my Star column this weekend No Honeymoon for Uhuruto, I note how there is no honeymoon for this Uhuruto presidency. I also note how the duo is on a wrong trajectory to the extent they are engaged conduct that worsens rather than improving ukabila such as the lopsided government appointments largely favoring Kikuyus and Kalenjins only.

When UhuRuto have not been busy appointing folks from their backyards to all key or plum government positions, they’ve apparently been on to the process of knocking off Luos from key government appointments.

Again, Uhuru can easily break from the past and chart a course for the country that’s inclusive not exclusive. It doesn’t take a genius to do that; rather it takes a leader with compassion and belief all that Kenyans are equal under God from whom our laws draw ultimate guidance and therefore none among them should be discriminated against or denied opportunity from the collective sweat of the nation merely because those in power whimsically say they should be so discriminated against or denied opportunity.

Doing so is backward and undemocratic.

Yet, there are those openly calling on Uhuru to use his office to “tame” Raila and, by extension the Luo community and all those others who support him.

We recently saw a manifestation of this by the so-called government spokesman Muthui Kariuki who busted out of nowhere and started blabbing some totally inappropriate gibberish unbecoming of the office of the president. Yet this political hack purported to speak for the President only to be contradicted and corrected the next day by a sober Cabinet Secretary who, to his credit, figured such incendiary chatter unnecessary and intolerable

But beyond politics, vindictive acts like these can quickly send our country back to where we’ve been and worse no one in their right mind should ever wish or want that to be the case.

We know the country is not without any number of reckless individuals who left unchecked would plunge our country where we don’t ever want to go but the prevailing wisdom is that the vast majority of Kenyans won’t let them.

On the other hand, an argument is put forth that Jubilee is entitled to a lion’s share if not all of the appointments because they “won”.

To turn around and only appoint or direct national resources to only Jubilee strongholds under these circumstances would be to turn on its head the notion of ‘to the winner goes the spoils, adding salt to injury to the extent that doing so exacerbates an already wounded national unity.

One would have to believe our president knows better. Let us hope he will let sobriety prevail and do that which is right in appointing public officials and distributing national resources.

That dual task has thus far been on an unacceptable trajectory.

Posted by Samuel N. Omwenga on August 3, 2013 in Politics

2 responses to “No Honeymoon for Uhuruto”