RSS
← Hon. Robert F Godec Has Been Sworn In As New Ambassador To Kenya
Official Launch of Raila’s Presidential Bid →

The Kibaki Succession Game: Unfolding Truth and Other Revelations–An Update 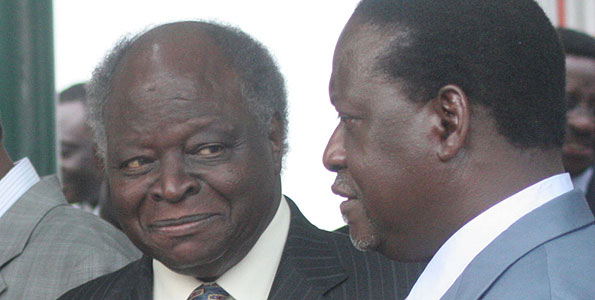 [You think I should tosha you?] Hmmmmm; let me see…would be nice, but no thanks; I have this in the bag.

In The Kibaki Succession Game: Unfolding Truth and Other Revelations Part IV, I penned in June last year, I noted the following:

The schemers have put the overall price tag for their invidious scheme to retain control of the presidency at 9 billion, 900 million, with 6 billion of that already pledged by one individual who is key in KSG.

The rest is to come from—guess where?

Supporters who have for a long time been strategically placed in various ministries, starting from Treasury are under instructions to start stealing and piling in a fund to finance this scheme.

It is feared that the theft has long since started and is underway.

The rest of the money will come from a list of about 100 individuals who are each tasked to raise 100 million each.

Other plans include maximizing the use of tribalism and other divisive tactics to deny Raila the vote not to forget the good-old massive rigging.

A couple of months later, the Standard in a story titled Kibaki Administration Pays Out Billions As Election Nears confirmed this to be, indeed, the case underway consistent with what was reported in that blog.

In updating my initial blog on this, I noted I was sure the Kibaki/UK people were saying, mta do?

My initial reporting of this was further vindicated by the Star in Uhuru To Spend 10 billion in Campaign where Jubilee in efforts to show to what extent its willing to go to buy its way into State House, leaked its budget to the media.

That my sourcing is credible, therefore, cannot be doubted.

The same source I relied in my initial blogging on this now tells me even though it’s all along been the plan and, in fact, the case that public funds and resources have made their way to the Uhuru campaign, all is not well with this strategy.

In fact, the source tells me there is an altogether new strategy I’ll disclose in Kibaki Succession Game: Unfolding Truths and Other Revelations Part VI coming soon.

Heads Up: Raila and Cord will like the strategy much as that sounds oxymoronic or a contradiction of terms.

The schemers may have had no choice but to nonetheless go this direction, even though a case could be made otherwise or either that someone is seriously trying to have Raila elected from within the schemers.

Cannot rule that out and am mulling whether to posit as to why for fear of jinxing a good thing coming Raila’s way if, indeed, that’s the case.

← Hon. Robert F Godec Has Been Sworn In As New Ambassador To Kenya
Official Launch of Raila’s Presidential Bid →

2 responses to “The Kibaki Succession Game: Unfolding Truth and Other Revelations–An Update”